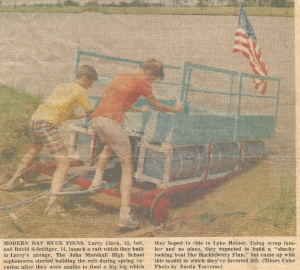 I remember the summer of 1967 clearly, even though it was 50 years ago.  It was the “summer of love” in Haight-Ashbury.  It was the era of the Beatles, the Rolling Stones and the Mamas and the Papas.  I was an unhappy agnostic that had just finished the ninth grade.  My life was on a downward spiral.  I hated my parents, my grades were in a steep decline and I didn’t have a clue where I was going.  As the summer of ’67 commenced, I really had nothing important to do and lots of time on my hands.

My “weird” Christian schoolmate, Larry, suggest that we build a raft at his house.  It sounded like a fun project, so I accepted.  We built the raft, working mostly with materials we stole from construction sites.  Larry’s dad helped us build it.  The total cost of the project was $19.  Upon completion, it about five feet wide and eight feet long.  We also built a wagon carriage to transport it, and launched it at a small lake nearby.

While we worked on the raft, Larry would share from a tract called “The Four Spiritual Laws.”  He did not get past law #1 (God Has a Wonderful Plan For Your Life) without provoking an argument.  There was no way I would accept that “law” – my life stunk! Nevertheless, he persisted.  Little did I know, but Larry had recruited family and friends to pray for my salvation.  Then, he initiated phase two of his evangelistic strategy:  He invited me to a Baptist Camp!  This was not just any Baptist Camp – this was Falls Creek Baptist Assembly in the Arbuckle Mountains of southern Oklahoma.  This was the GRANDDADDY of Christian Camps – 8,000 Baptist teenagers from across Oklahoma sequestered in the mountains for a week.  It was a veritable hotbed of hellfire and brimstone fundamentalism!  Little did I know when I accepted his invitation what I was in for!

From July 23-29, 1967, I attended this camp.  This was the first week I had been away from home and, boy, was I out of my element!   For a lapsed Presbyterian, this was unlike anything I had ever seen or heard!  I heard the gospel every morning and night, as well as attending Bible classes in between.  By mid-week, I was in agnostic agony!  I was miserable and so convinced that I was lost and hell-bound, I knew I would have to either kill myself or become a Christian.  I just didn’t think I had the faith to receive Christ and I did not know where to start.  My friend Larry and I stayed up until 2:00 in the morning talking until I managed to fumble a prayer.  I had no idea what happened until I talked to a counselor later that day, who took me to John 3:16 and put my name in the verse:  “For God so loved David, that He gave His only begotten son, that if David believes in Him, David should not perish, but David will have everlasting life.”  The counselor asked me if I believed what he had just read.  I said that I did, and I still do 50 years to the day after July 27, 1967, the day of my spiritual birth!  Have you made life’s most important decision?